That Time I designed my own World Cup Wall Chart.

A while back (2010) before the world cup in South Africa, I decided to give designing a wall chart a go for the then upcoming World Cup. I was tired of looking at all the usual charts that newspapers and magazines would pump out and I wanted to give designing a wall chart for the world cup a go. I also wanted to learn more about using the pen tool in photoshop and how to use it to create shapes and then colour those shapes in an effective way. On a technical level this sort of task should be done in either adobe illustrator or Affinity Designer. The reason for this is that these programs are vector based and photoshop is bitmap based. Now you can do vectors in photoshop, but they are outputted in bitmap formats and can lose their quality when being printed. Vector programs use mathematics to create the shapes allowing them to be scaled with no loss of quality making them better suited for page layout and design in general. When I did this project I couldn’t afford Illustrator and Affinity Designer was not even a thing. But I did have photoshop, so that’s what I used.

Tournament wall charts have to have two basic things: group & knockout stage areas and spaces to add scores and team names. Everything else is decorative.

I based the idea of the chart on the now defunct weenicons character style, specifically the Captain James T Kirk design. The design style is 2D and very much South Park like in style. This is ideal for someone who has not drawn for years and is looking to learn new parts of a program. I opened up a saved image into photoshop and sketched over the top, trying to create each part of the character as a different section. Keeping the finished shapes as vectors allowed me to adjust the shape at a later point in time. 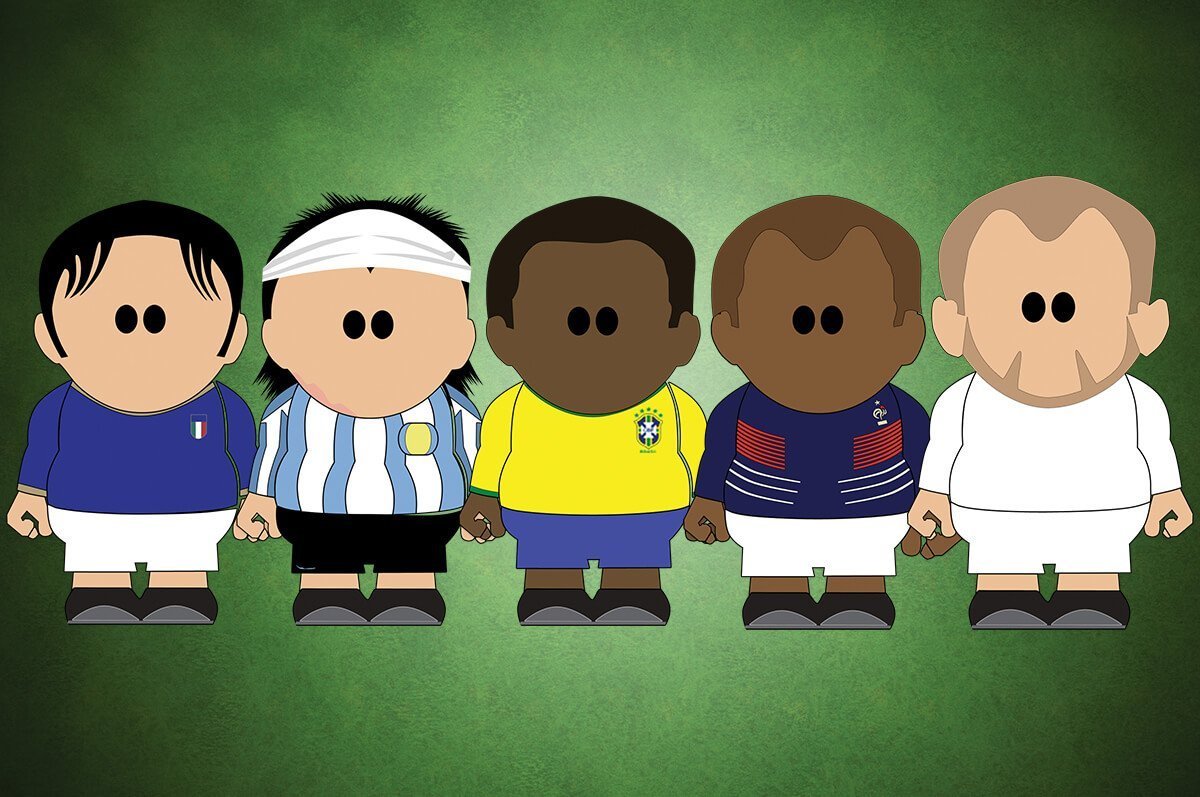 Something else I wanted to do was to make each countries character different. Obviously the kit has to be specific for the design of the actual kit at the time, but i also wanted to modify the look of the character based on a prominent player of that particular team. This added an extra level of basic skill requirement because I couldn’t copy for an established design, I had to create it myself. 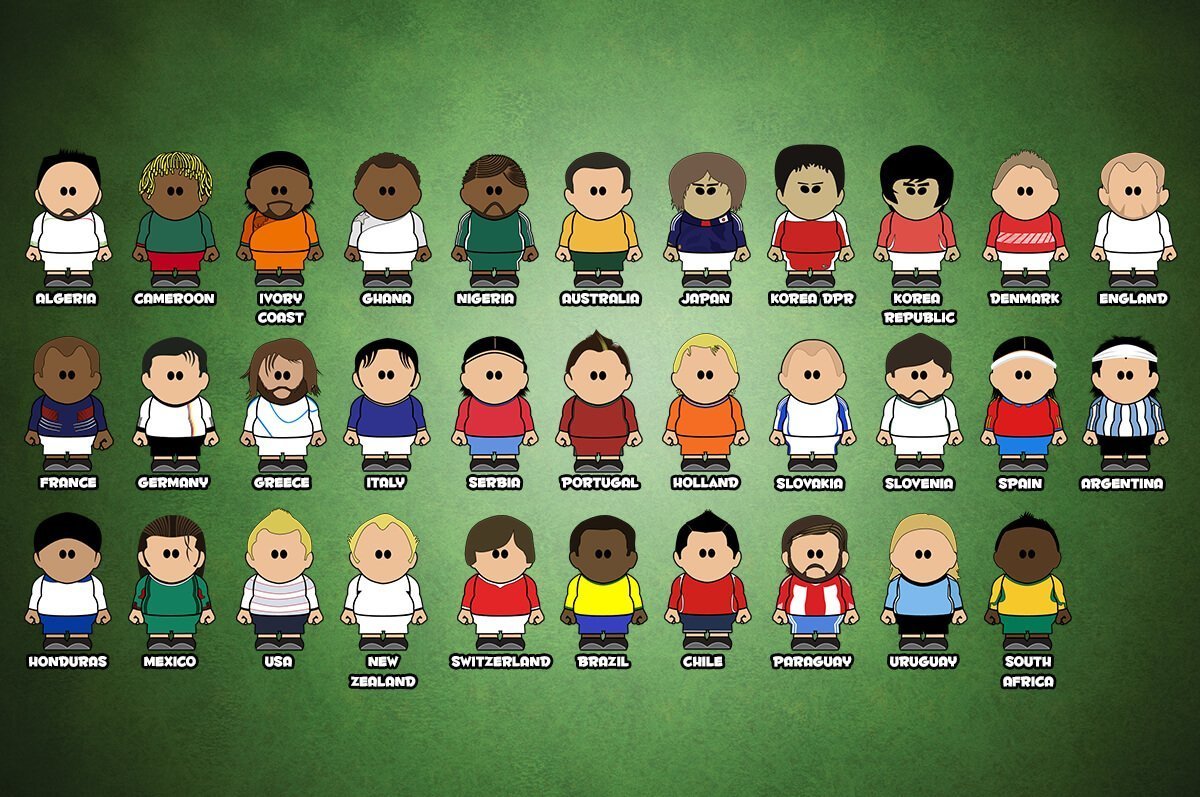 Building a texture for the background

Most world cup charts are a mishmash of player photos or are just really cluttered. Football is played on grass (most of the time) so I wanted to start the base of the images as a grass texture. I used a basic vignetted green and then blended it with a random grass like texture using the ‘overlay’ blend mode. I then contrasted this further and added a white radial gradient to create a highlight. The section for the tournament details was a repeated leather texture coloured blue that was also set to overlay blendmode.

One thing I wanted to do was add some very specific details. Most of the charts you find in newspapers are created for workplace walls for sweepstakes or just to keep track of results. I wanted to throw in some additional information. I added a section detailing some facts about South Africa, the Stadiums and about the World Cup in general. 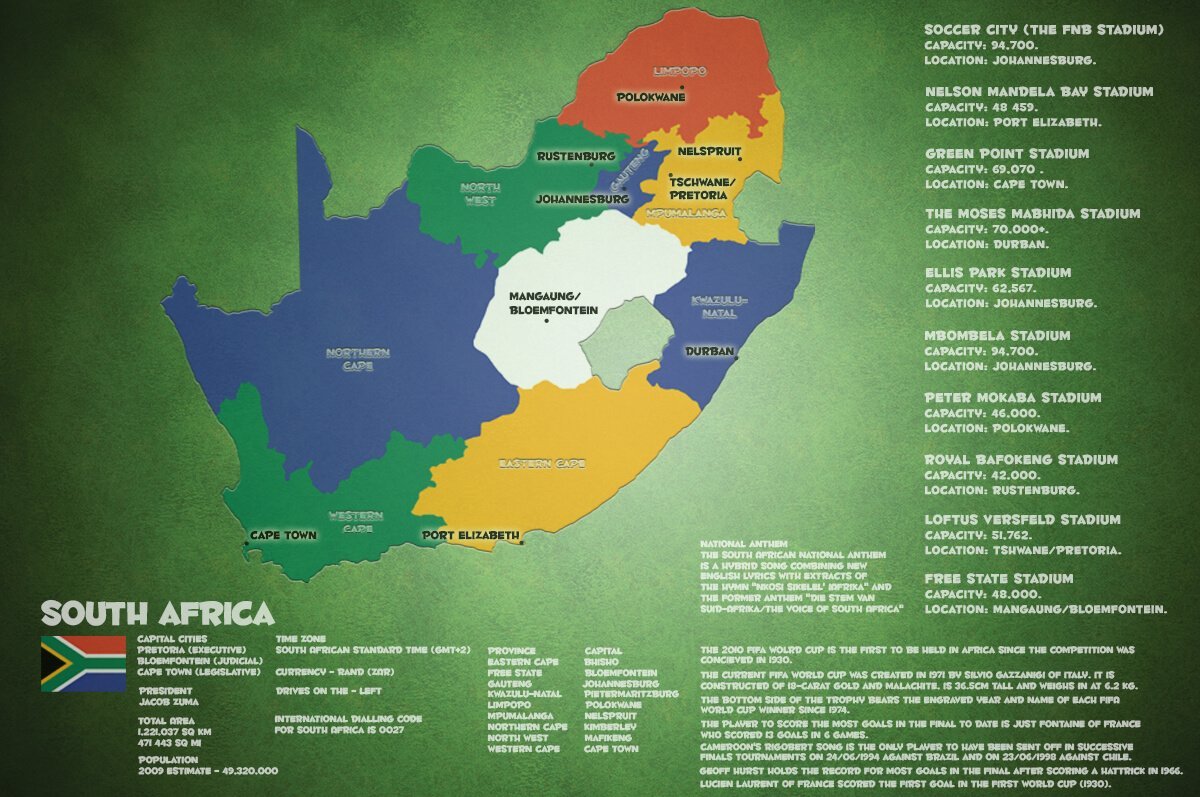 World cup winning countries get to display stars on their jerseys for the number of cups won. I wanted to add this to the teams names along with the year those stars were earned. 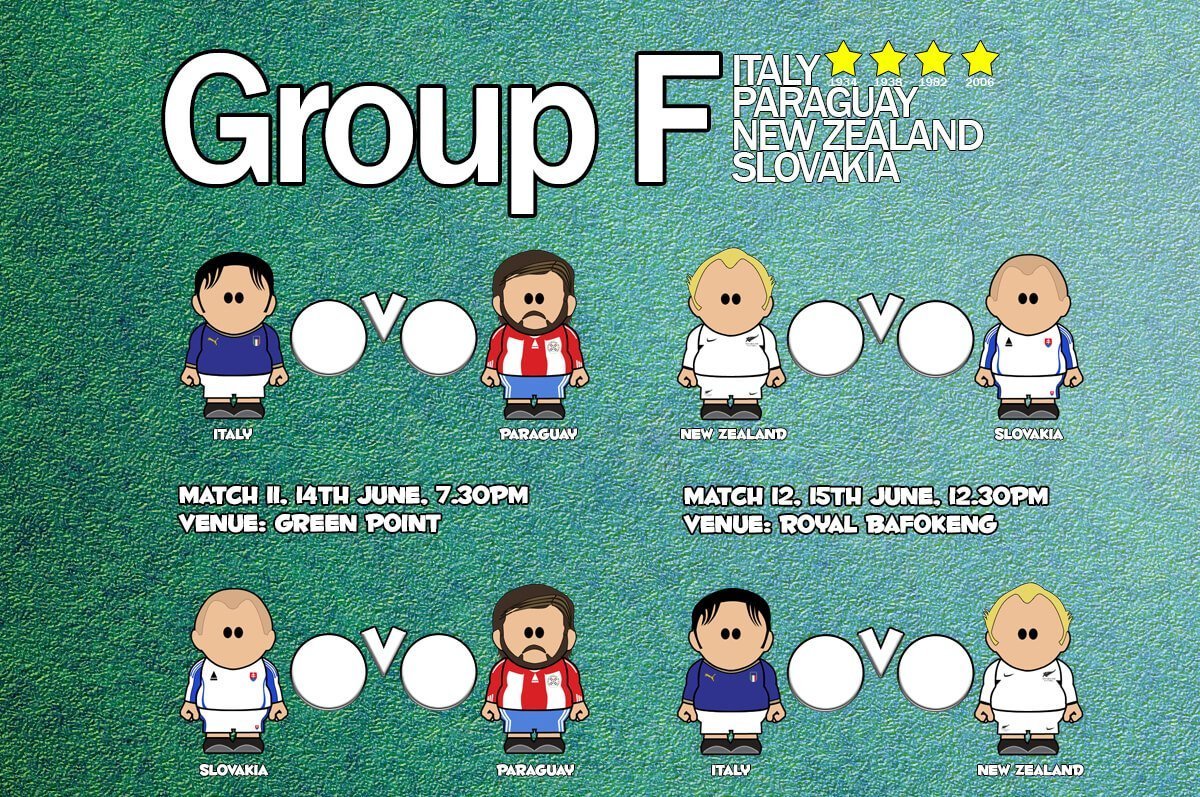 Soccer City Stadium (also known as The Calabash or FNB Stadium) was built in 1987 and renovated for the 2010 World Cup. The renovation took inspiration from the shape of an African pot called a calabash. Along with The Bird’s Nest Stadium it is one of the more unique looking football stadiums in the world. I created a vector image from a aerial image I sourced from google. I wanted to use this as a visual asset for the final. at this point in the process I had become fairly adept at using the pen tool to create this images. Two points to note here are the use of gradient layer styles to create more of a 3D perspective and using coloured noise to create the crowd effect. Everything else was just a sketch over the top of the base photo. 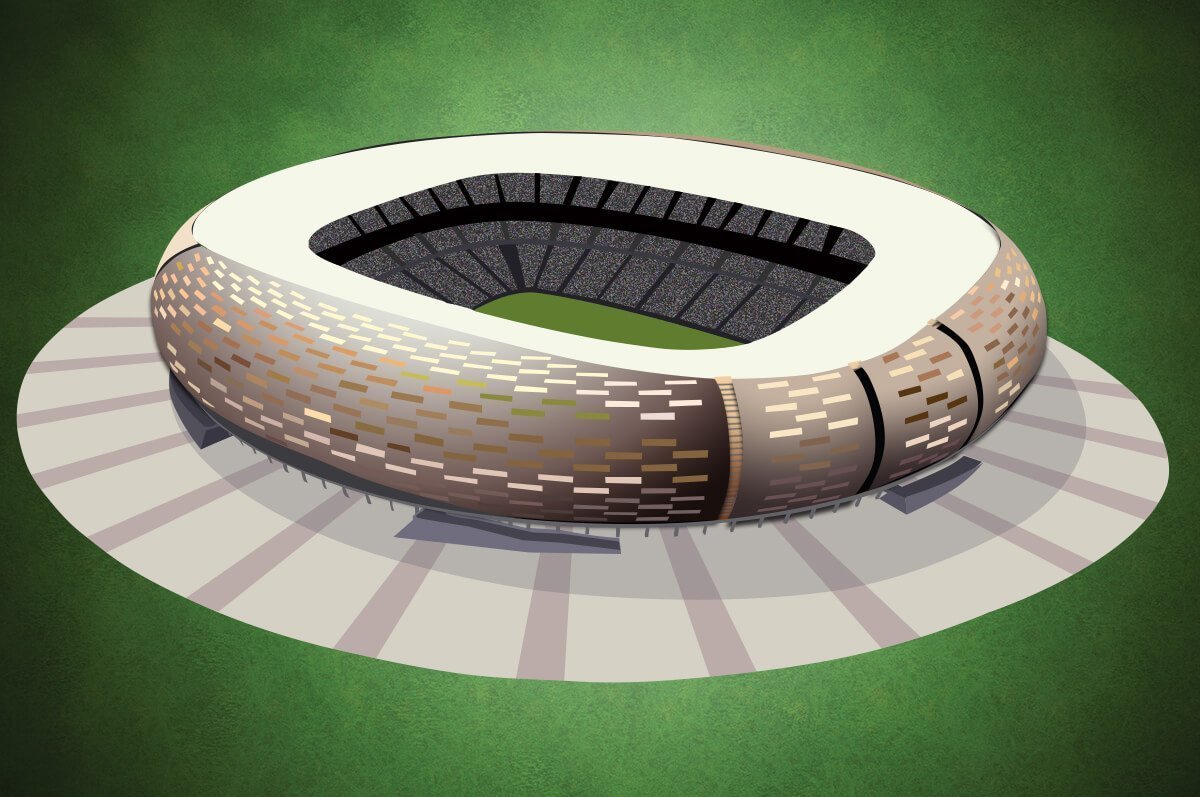 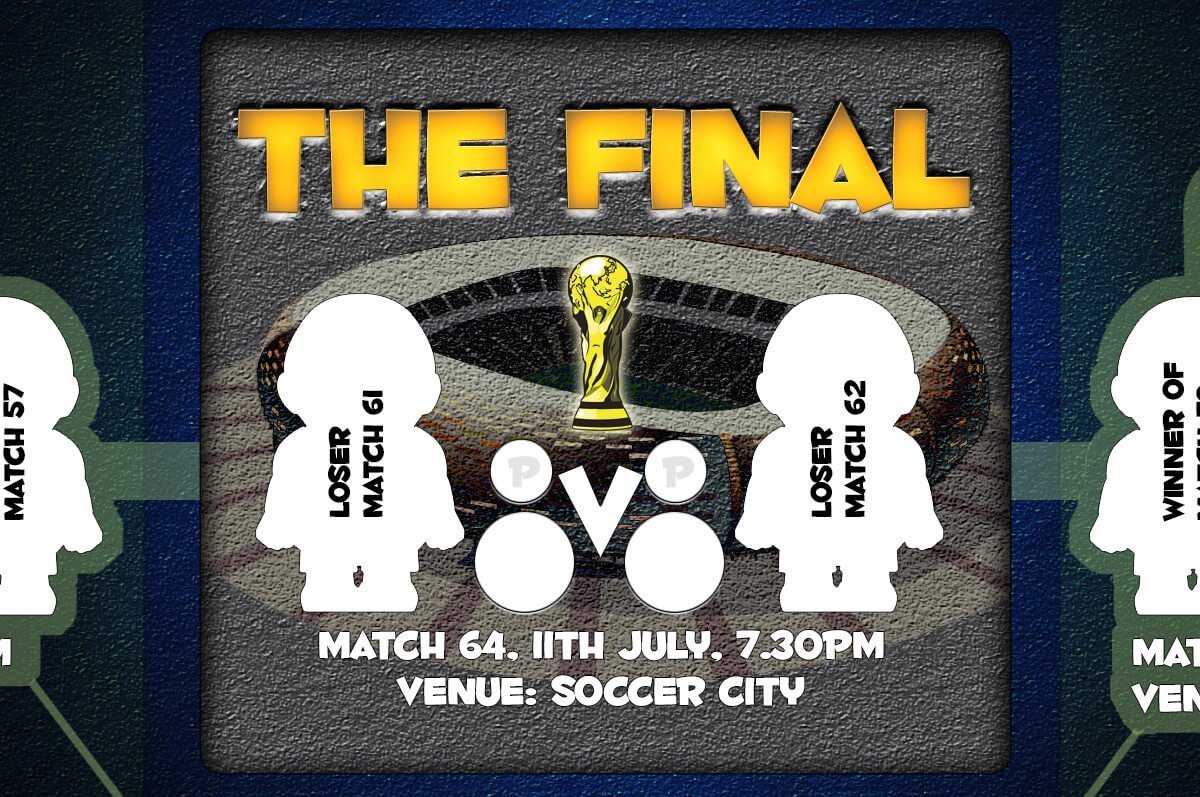 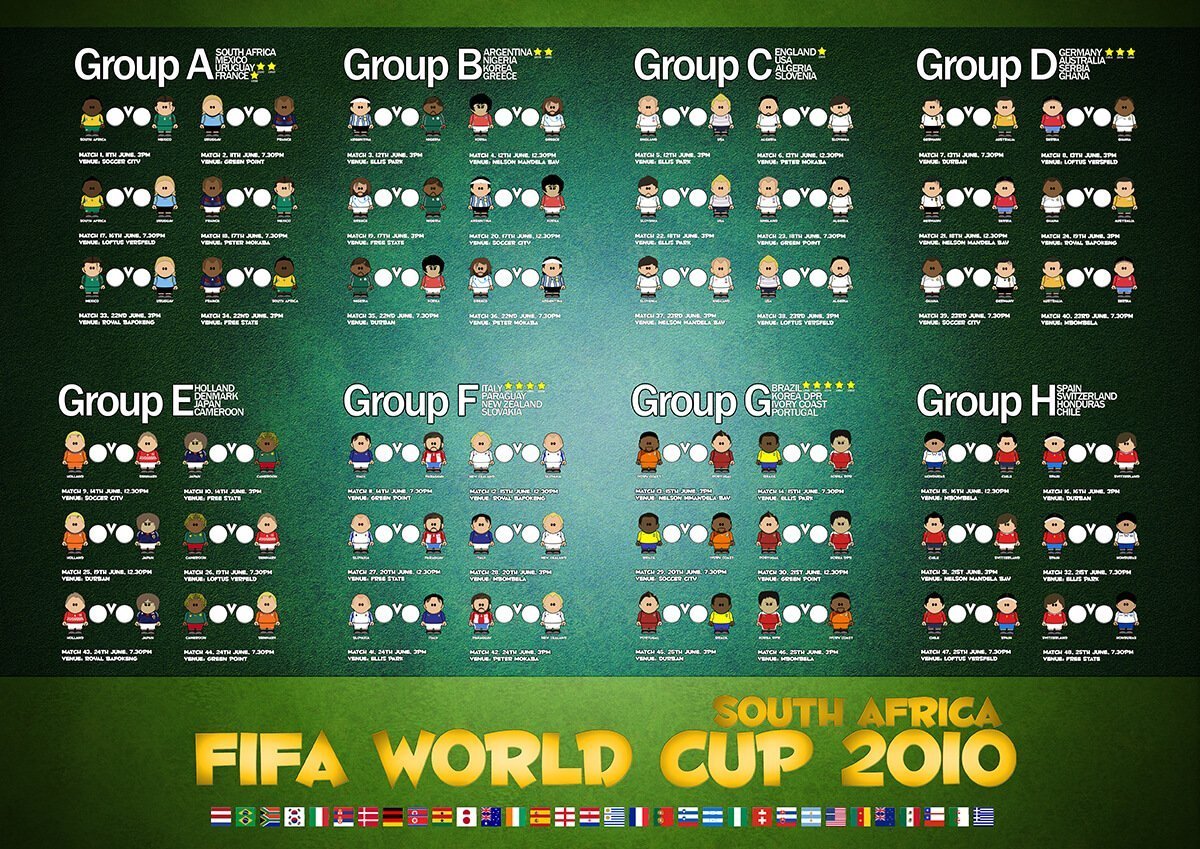 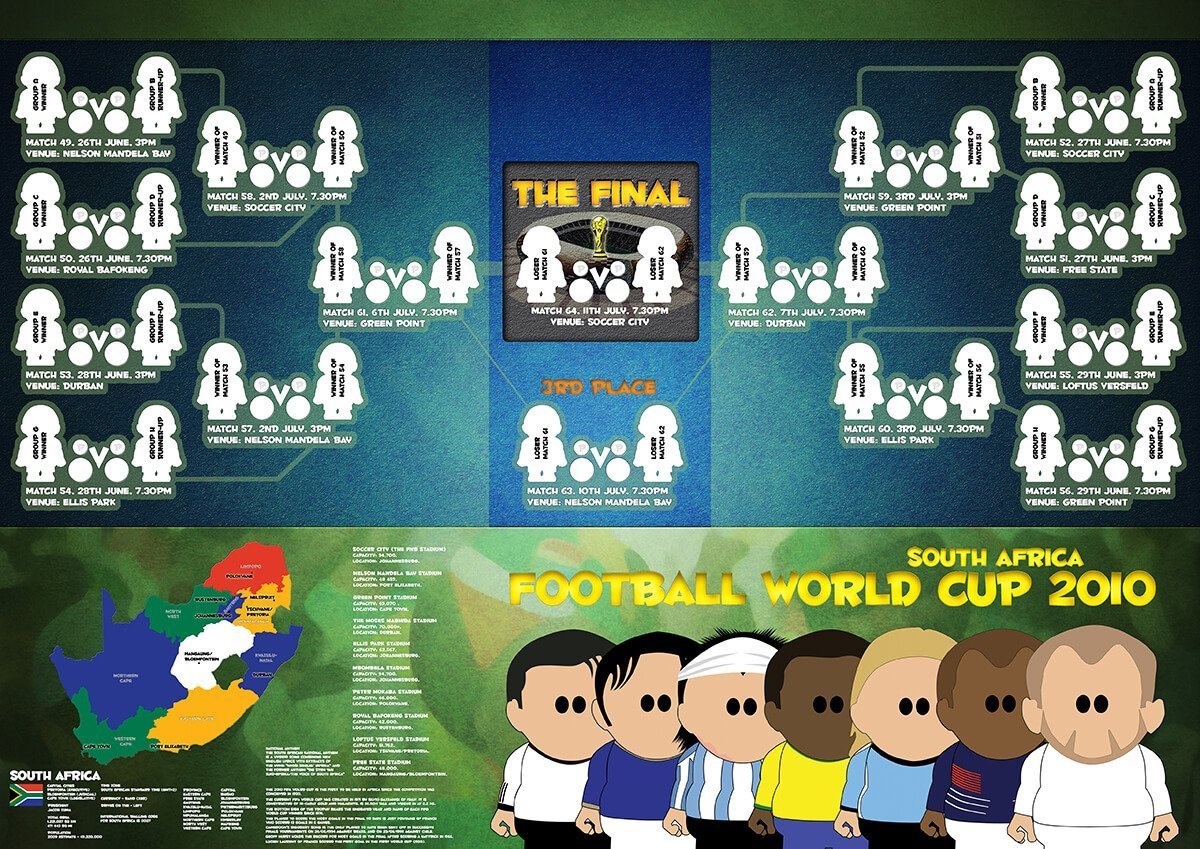 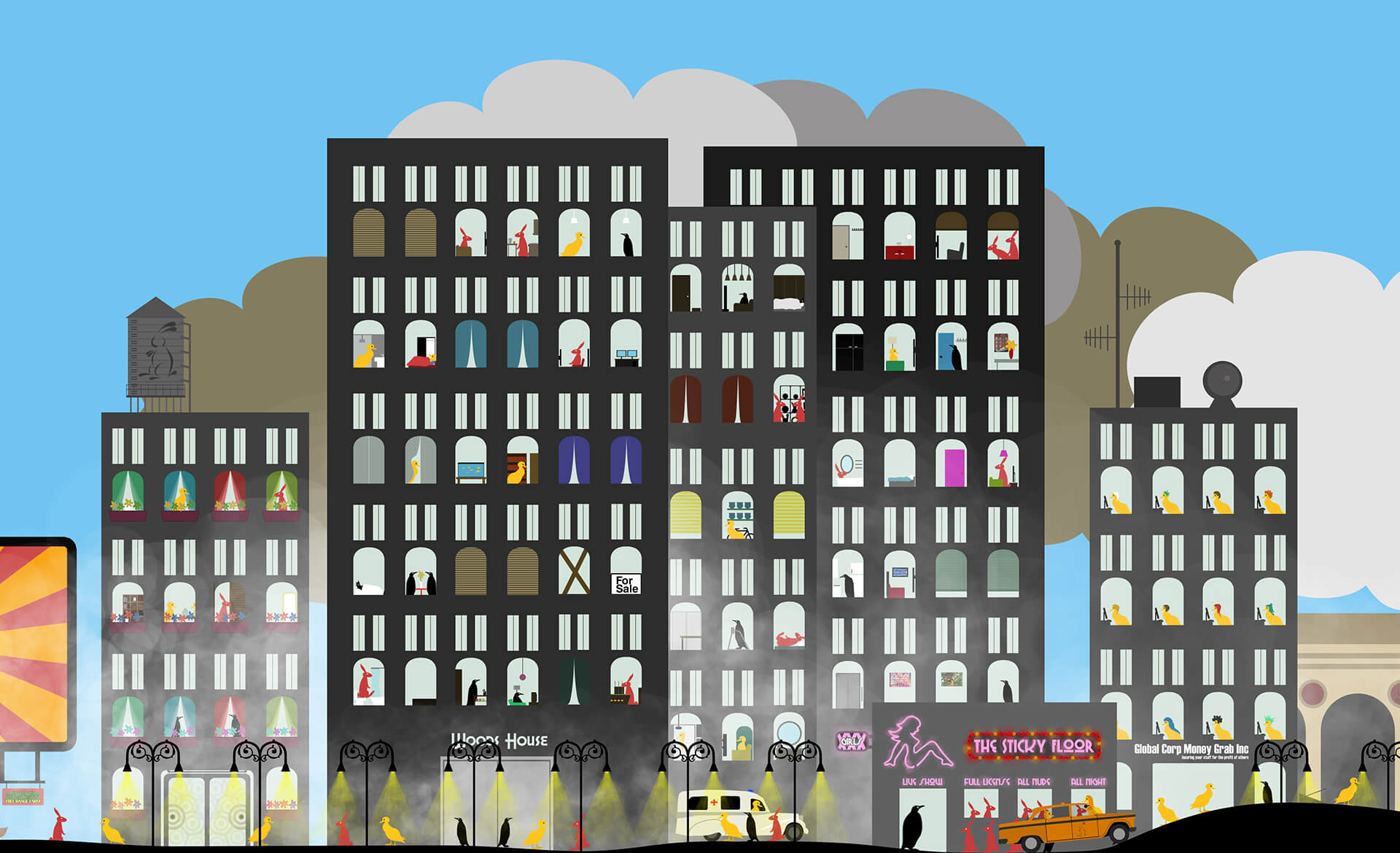