My First Composite – the lake scene from Disneys ‘Tangled’.

For a long time now I have wanted to get into compositing having been inspired by guys like Dave Hill, Erik Johansson, Dimitri Daniloff, Tim Tadder, by agencies like Taylor James and by almost every film released since CGI became a tool of choice for film makers. I love how elements are seamlessly brought together to realise an idea and I admire the skill with which it is done. The part that has prevented me from getting started has been getting my head out of stills mode and into developing ideas for compositing. The technical aspect is less of a problem, years of photoshopping has taught me how to use most of the selection and blending tools on offer. The main problem I had was acquiring the necessary visual assets to develop an idea and then combining those in a coherent manner to resemble something worth looking at.

I decided after several failed attempts that original thought was pointless. So I reflected back on previous non photographic artistic endeavours and the methods I adopted to achieve these. An idea formed, find something to copy and copy the hell out of it! Copying by and large is part of the learning process. Some consider it a bad thing to do and dislike their idea’s being emulated. My own view point on this is that if you try and pass it off as original work it very much is bad ethic, but it isn’t if you are using it as a spring board for personal and creative development as everyone (and I mean everyone) copies another person’s idea to create their own thing otherwise known as ‘inspiration’. All I needed was to find something to inspire my copying crusade.

Then I sat down and watched the Disney film Tangled.

Now I am not a massive fan of Disney films, far too much singing, but Tangled kind of buried its little hooks in me and drew me in. One part of the film that stood out was the lake scene near the end with all the Chinese lanterns. For me it was visually stunning, and I wanted to do my own version but using real people and props. I figured in order to create something that would be complimentary I needed to have the original shot viewable most of the time, so I found a copy of it on the net and set it as a background on my desktop. This way I could look at it and begin to break it down into its basic parts. 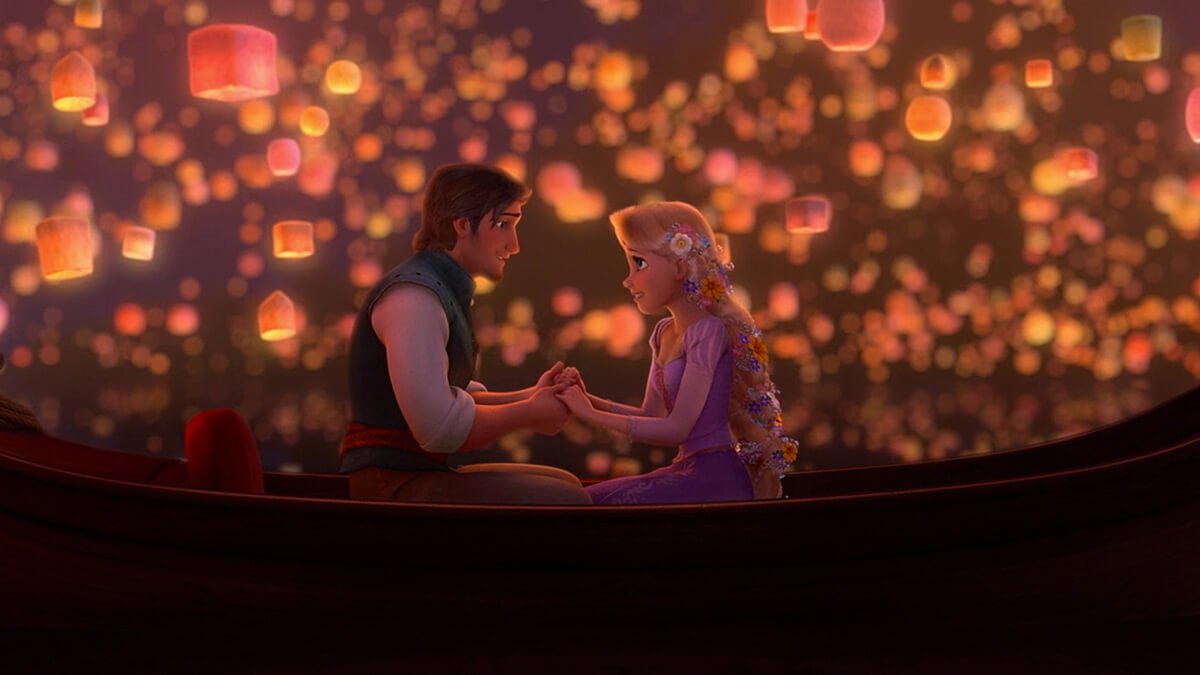 Breaking down the scene

There are four essential parts that make up the scene: the background, the lanterns, the couple and the boat.

The background in the film is just a blurred out sky and city. I took a photograph of the sky during the day to get some natural gradients (photoshop is horrendously poor at creating smooth gradients), drew the outline of the castle using the pen tool, added some Gaussian Blur and then added various textures to blend the background into the lanterns creating a kind of hazy mist effect. 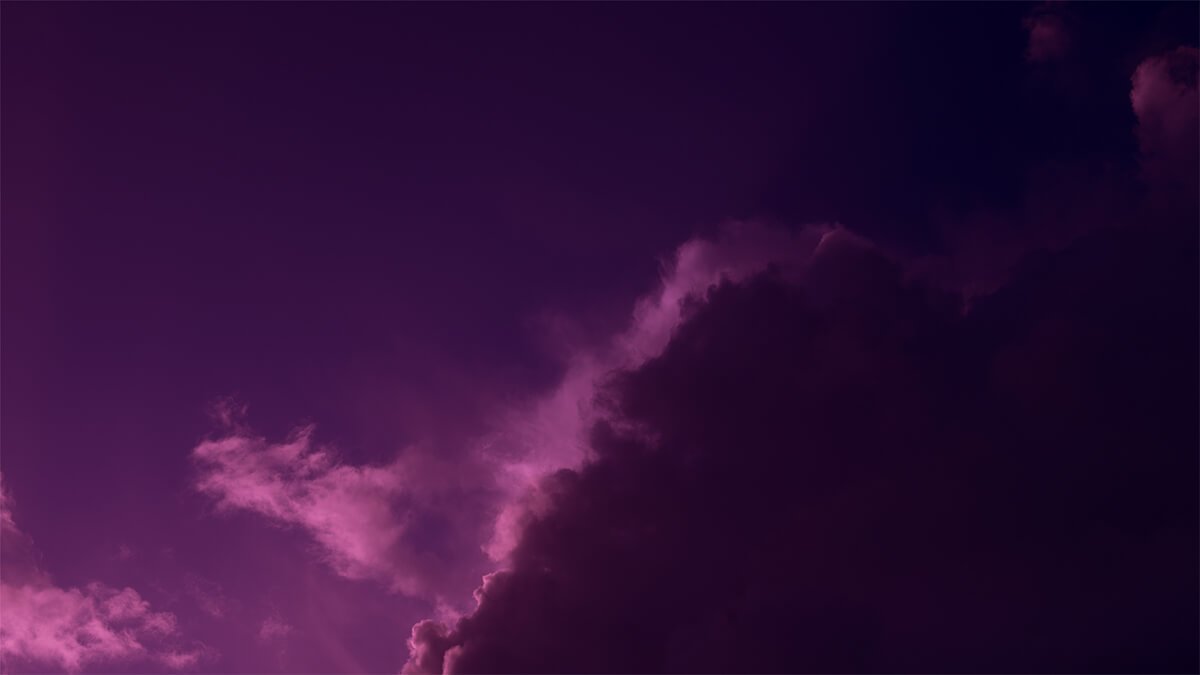 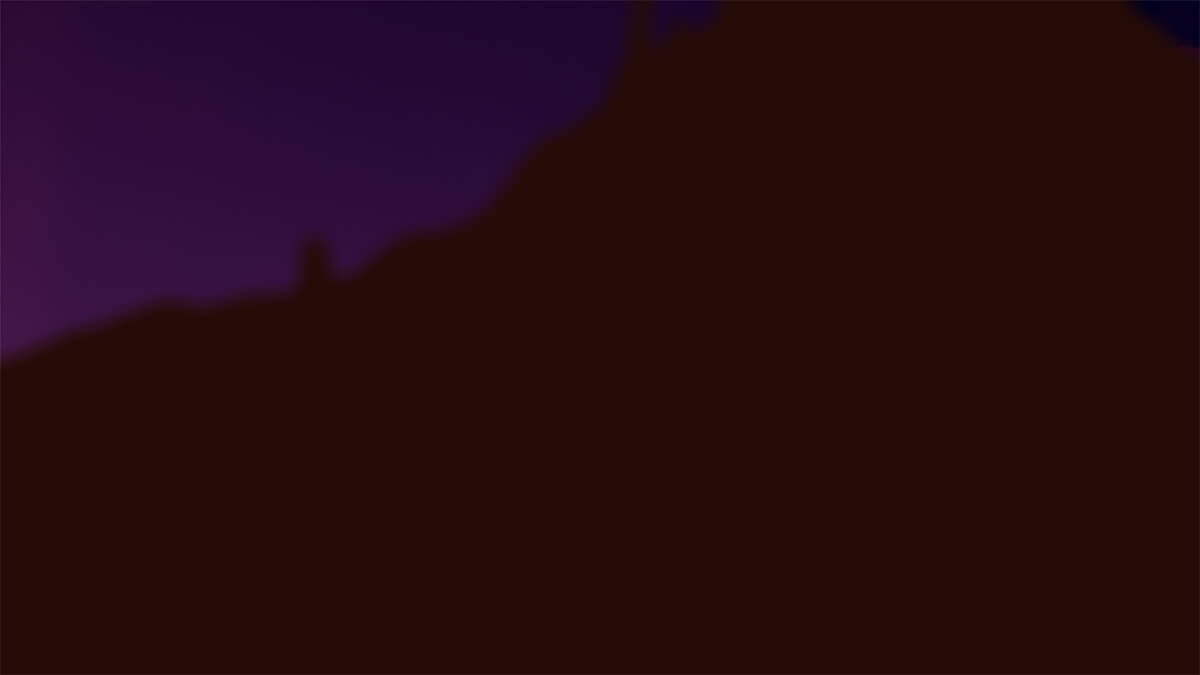 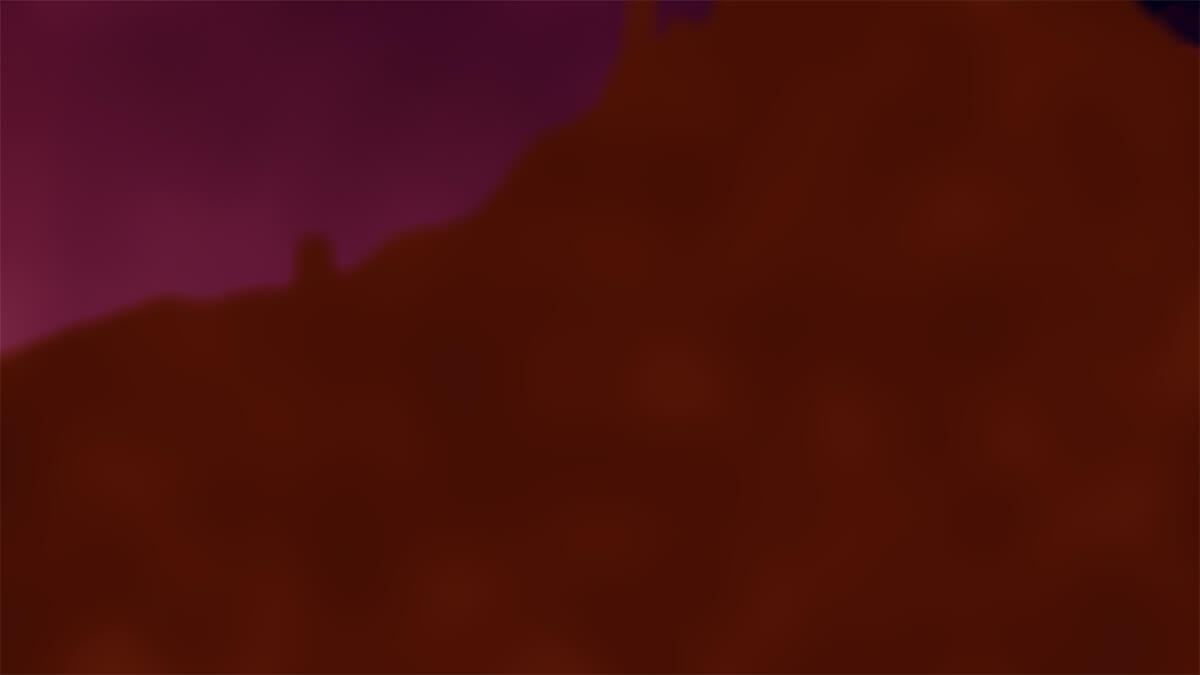 The lanterns – trying to photograph a Chinese lantern mid flight in a way that would allow me to have as much detail as possible is, unsurprisingly, quiet hard. I would have bought some Chinese lanterns but the problem with this approach was that there are not a huge variety of Chinese lanterns shapes out there to accommodate the various shapes seen in the film. Also photographing them would be hard as the shutter speeds needed to capture sufficient detail and tone to make a worthwhile manipulation was too low for how much the lantern would move when the candle was lit. I did some googling for paper lanterns and found www.hanginglanterns.co.uk, who sold three basic shapes: rectangular, tubed and globed. I bought one of each in white (this would make colour manipulation much easier in camera RAW) and made a setup using a boom arm and a L.E.D lamp as shown below. I set the camera on a tripod (Nikon D300, I did not need a massive megapixel count for these) and took some shots (RAW, not jpeg) once the lantern had stopped swinging. I moved the camera into several different positions to get a selection of shots for variety.

The lantern section itself is comprised of two parts, the visible lanterns and bokehed lanterns in the far distance. The stock shots would make up the visible lanterns allowing me to display detail, but trying to shrink, blur and rasterize these shots to create the distant lanterns seemed pointless. I played around with a few techniques and decided that a simple soft edge brush with colours taken from a reference image along with using variable opacity would do the best job to create the bokeh. 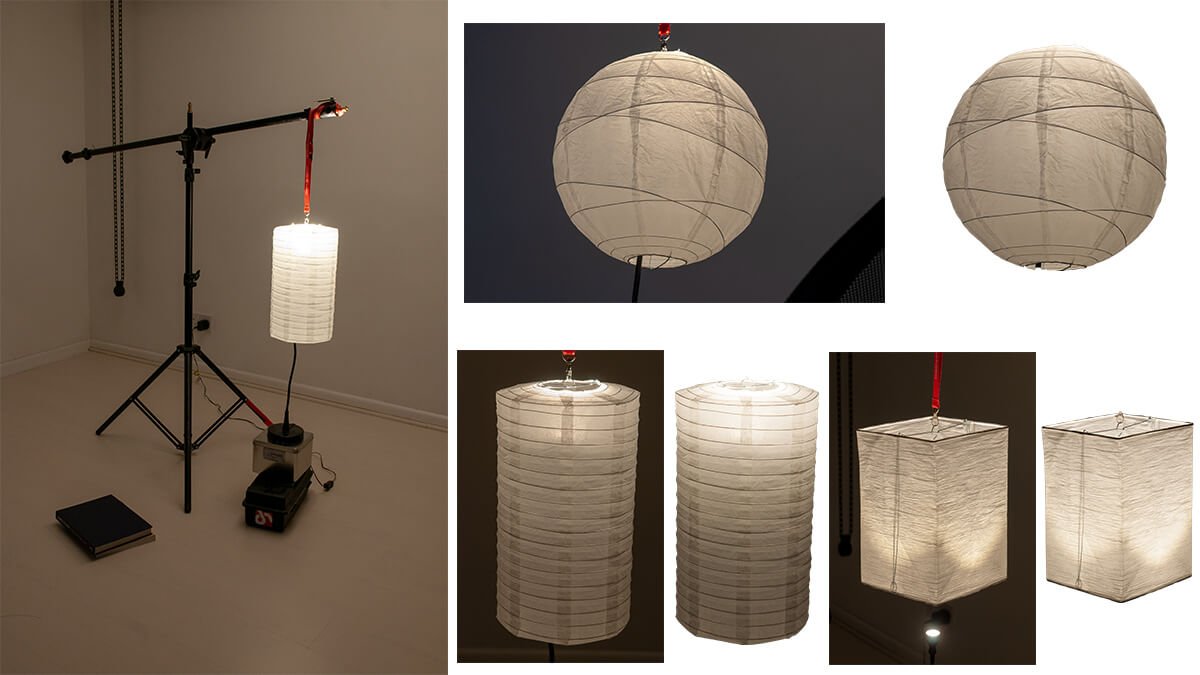 The stock shots, the cut outs and the rig used to photograph the paper lanterns. 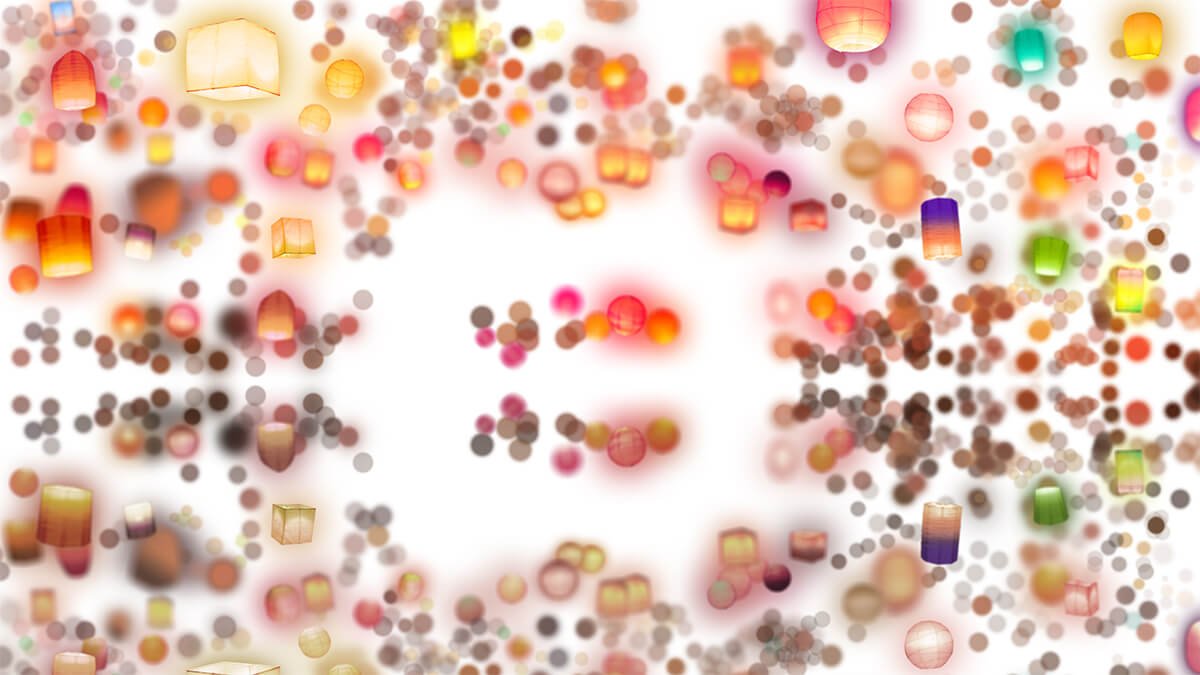 The light composite with no background. 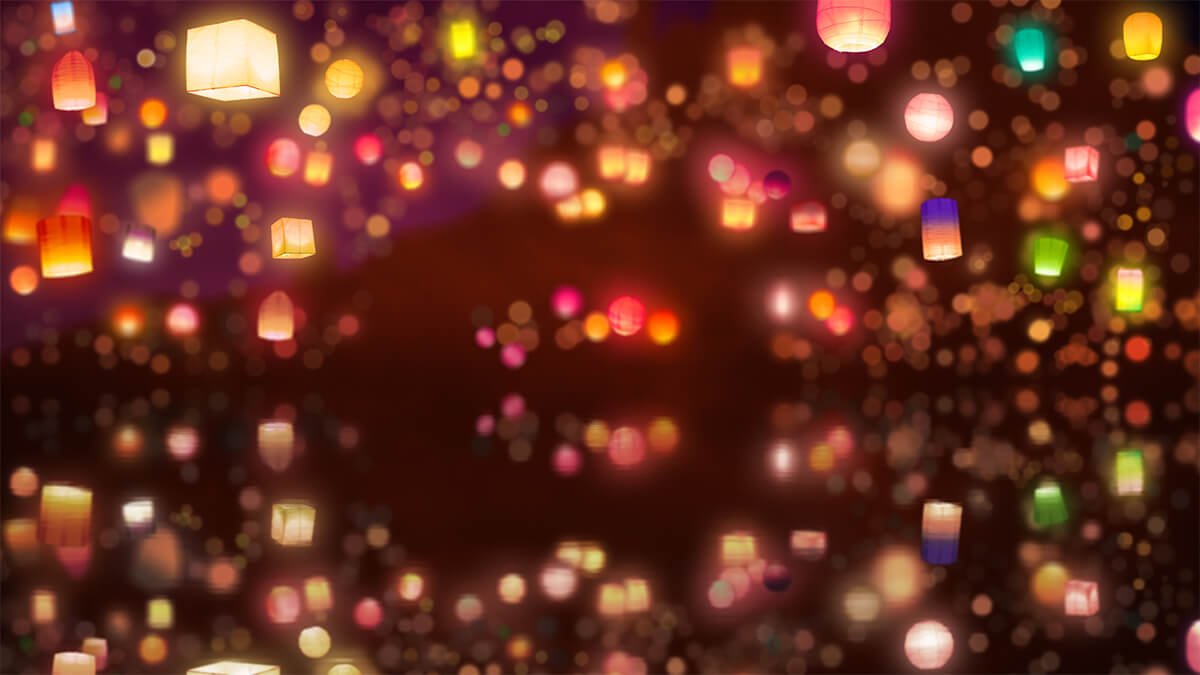 Light composite with background – final. Along with adding a bump map to create water ripples I also desaturated and darkened the lower half to provide some sort of surface separation.

The Couple – The real challenge would be the couple and the boat. Unfortunately I do not have a list of disney level attractive females and males to call at a moment’s notice. And from this absent list, which female would have 200 feet worth of hair? The idea I had initially was to create a wireframe wig and support it in place as I photographed said couple. This idea fell through when a hairdresser friend of mine fell ill.  As for the boat….who the hell owns a Venetian row boat in UK? I had planned to find a wooden row boat as the tight crop in the scene gave me some freedom to work with, photograph it and then manipulate those images to suite. But trying to find a pure wooden boat with no paint on it proved to be a challenge.

So I put the project on hold until I could find a solution to these barriers.

One day I was talking to my friend Holly about the problems I was encountering with this project. She had booked me to photograph her wedding a few months earlier and I was describing the whole lantern background idea whilst showing her the current work in progress shot on my phone and she said “I would love to have that many lanterns at my wedding!” and so the project was back on. The first challenge I had anticipated when photographing the couple would be the lighting as this is key to blending images seamlessly in composites. The lighting setup in the film is a complex rig with multiple light sources converging to create a dazzlingly colourfully lit scene. I own three mono blocks, two soft boxes and a brolly. Clearly I was not going to create the exact lighting used in the film, it was going to be a case of excessive compromise and then use some tone adjustment techniques in post. I decided to use wrap lighting and a soft front light to emulate glows from lanterns out of shot. 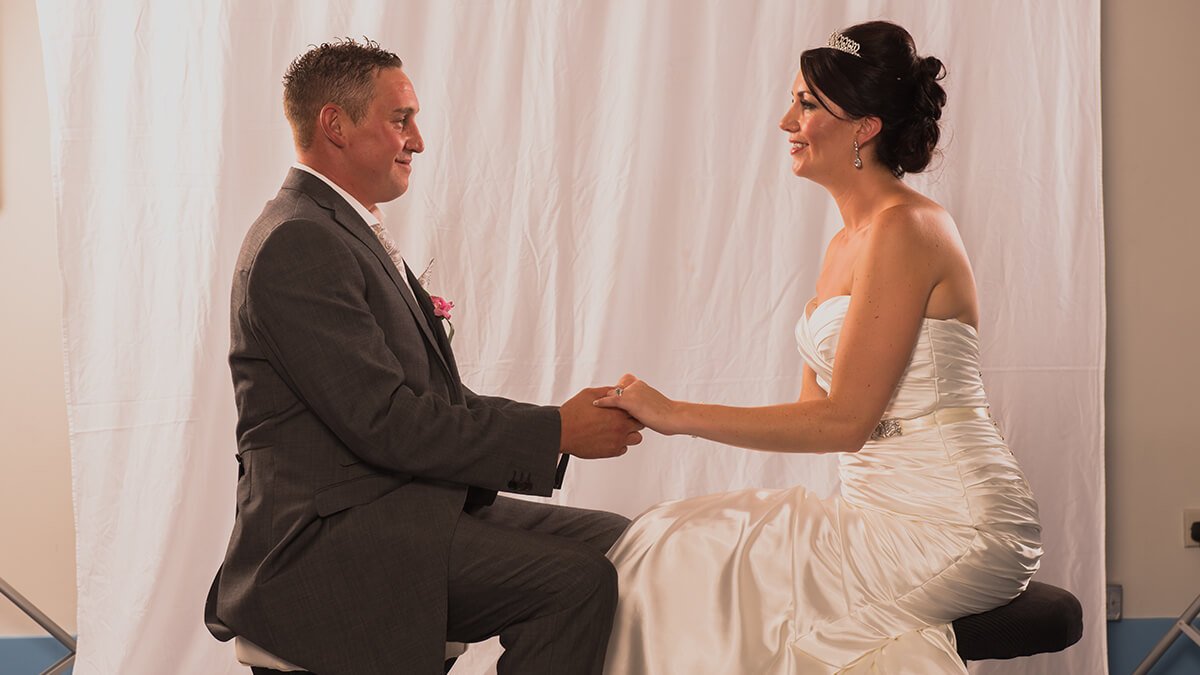 The wrap lighting I placed two soft boxes either side of Holly and Billy, one with a grid (Calumet Illumina – quality and affordable softy which is sadly no longer avaailable), the other without (it is a bowens soft box…who the hell can afford the grids for those!!). the brolly I placed at the front about 3 meters away. All of this was setup during the reception, a time when most wedding photogs dedicate to doing nothing but mentally relaxing and eating. I unloaded and setup a portable studio, blagged a room at the venue, shifted a partially dressed DJ who was watching a tv show on his laptop around, and then set the gear up. As I had five minutes to work with the couple before heading off to get some shots of them before the evening festivities, taking test shots and dropping them into the comp to see if the setup worked was not an option. I had to best guess the lighting and hope everything worked. Which it kind of did.

The Boat – Trying to find a suitable boat to butcher in photoshop was proving to be a challenge, late one night I decided to draw it in by hand and use textures. I had the reference shot of the scene as the background layer, so I amped up the brightness using a curve adjustment layer and traced out the parts of the boat using the pen tool to create some vector shapes. I then took samples of colour from the reference shot and applied a few gradient adjustments and drop shadows to create the natural tone gradient and seems between wood panels. This looked ok but it was lacking the wooden look wooden boats kind of need. Whilst there are more than enough tutorials out on the web on how to create wooden textures I figured I might as well just use a texture shot I took a few weeks earlier of some African Oak. I laid this out on the comp, blended them together and then used the soft light blending mode to allow the gradient and colour from the vector shapes underneath to come though the texture layer. I then shaped the boat using some black gradients and then created the foreground reflection. 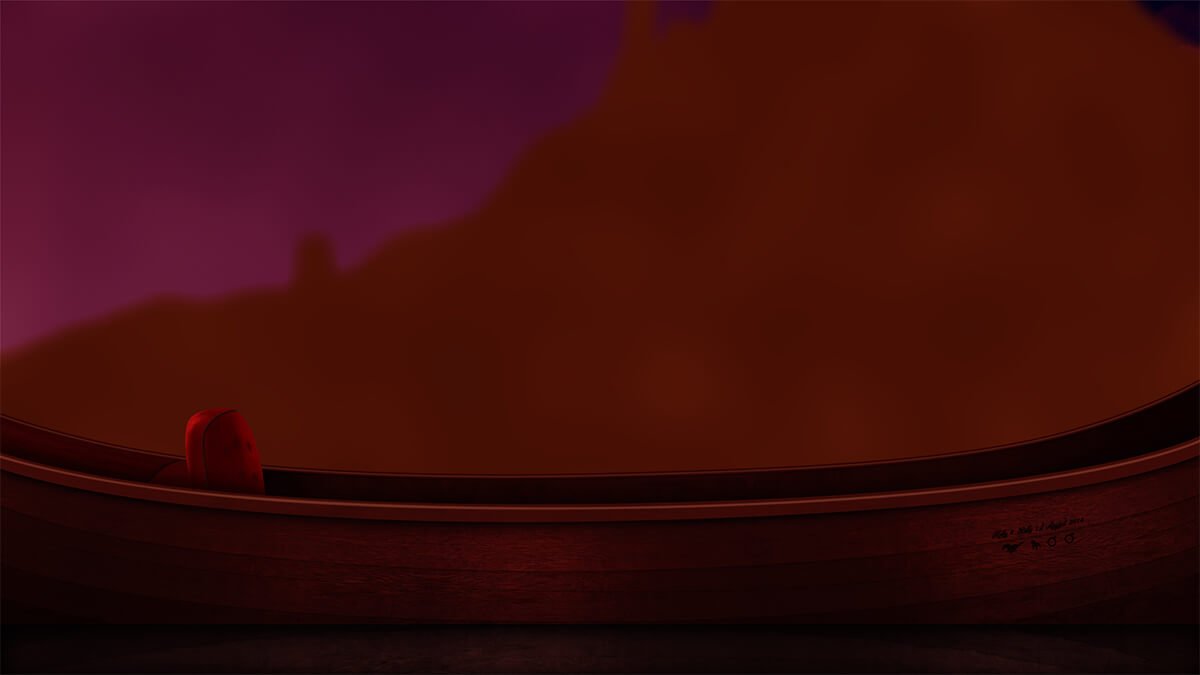 base plate with no blend 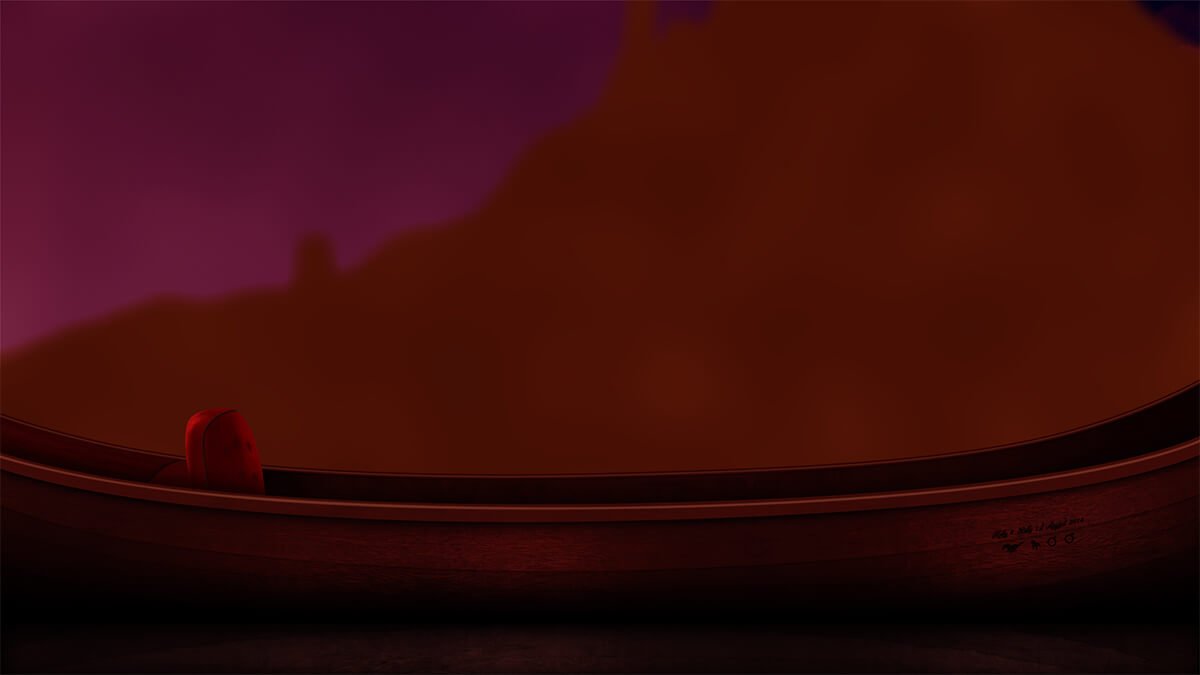 I added a simple black reflected gradient to separate the reflection of the boat from the boat itself. This also starts to create a curved shape. 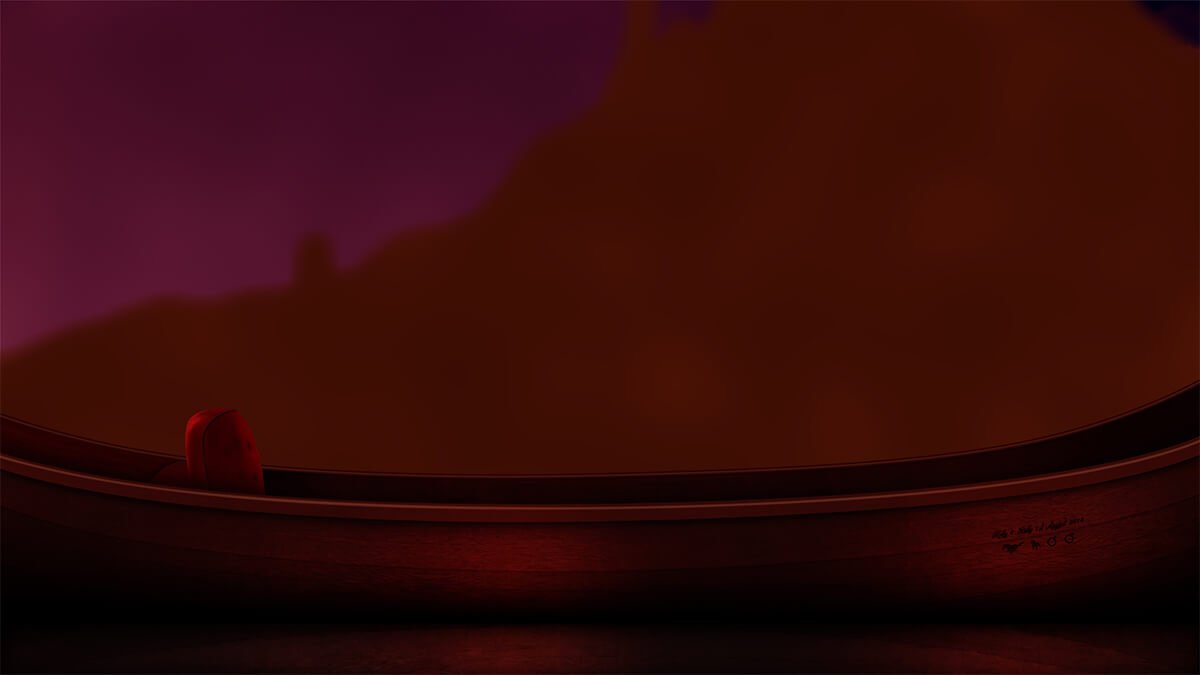 I then added some focus lighting by hand painting a couple of simple orangish patches then applying a soft light blending mode. 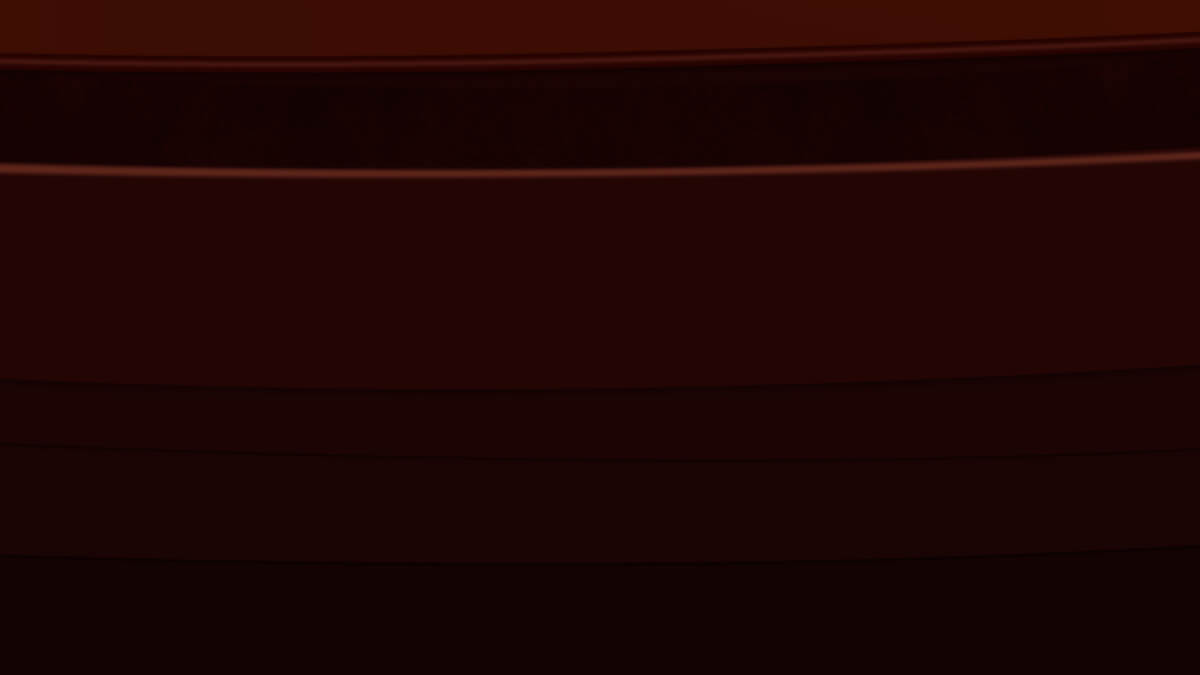 Boat material with no texture applied. To start to seperate the layer I added a drop shadow to the bottom of each layer. 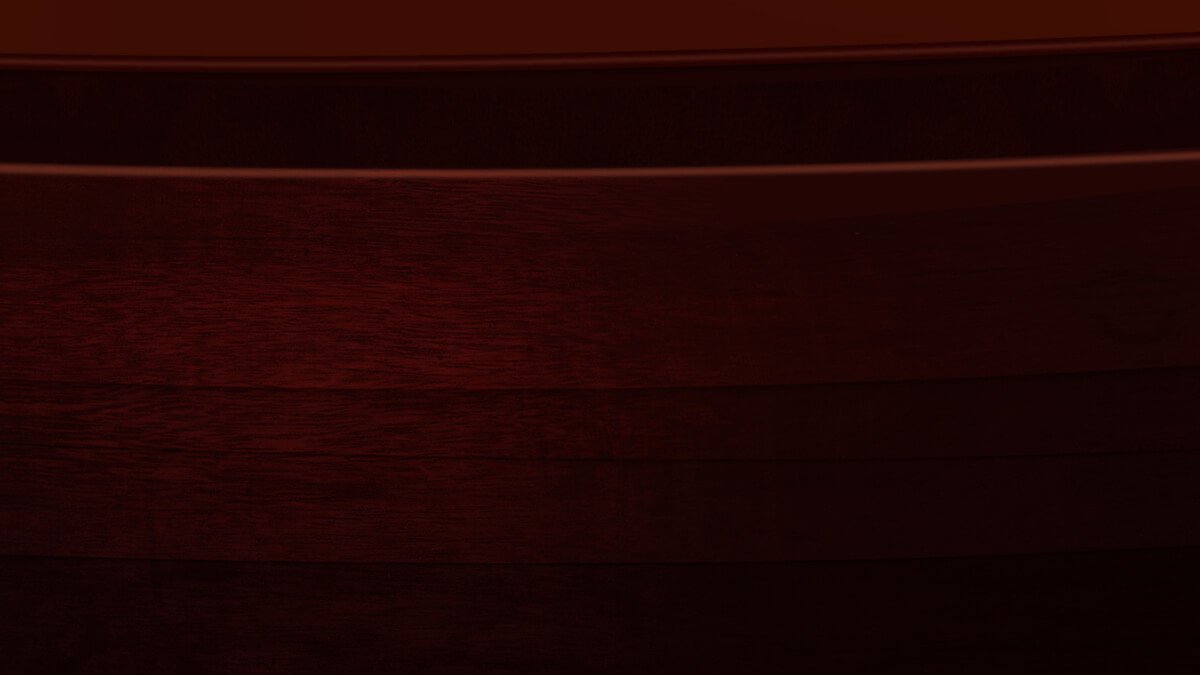 Blending the image together – the final stage I went through was blending the foreground into the background. A trick used by 3D studios is to wrap background light around foreground subjects. This little snippet was passed onto me by Sol @ RewindFX. To achieve this I duplicated the lantern layer without the background, moved it up the stack, added a touch of blur and reduced the opacity. I then used layers set to the colour blending mode to hand paint on to the couple any other reflecting colours. A few tonal adjustments were made using the curves tool with a luminance selection (Ctril click the RGB layer in the channels window) and I added an average blur layer and reduced back the opacity to blend the colour of the entire scene together. This is a technique I picked up in Matt Kloskowski’s book – Photoshop Compositing Secrets. 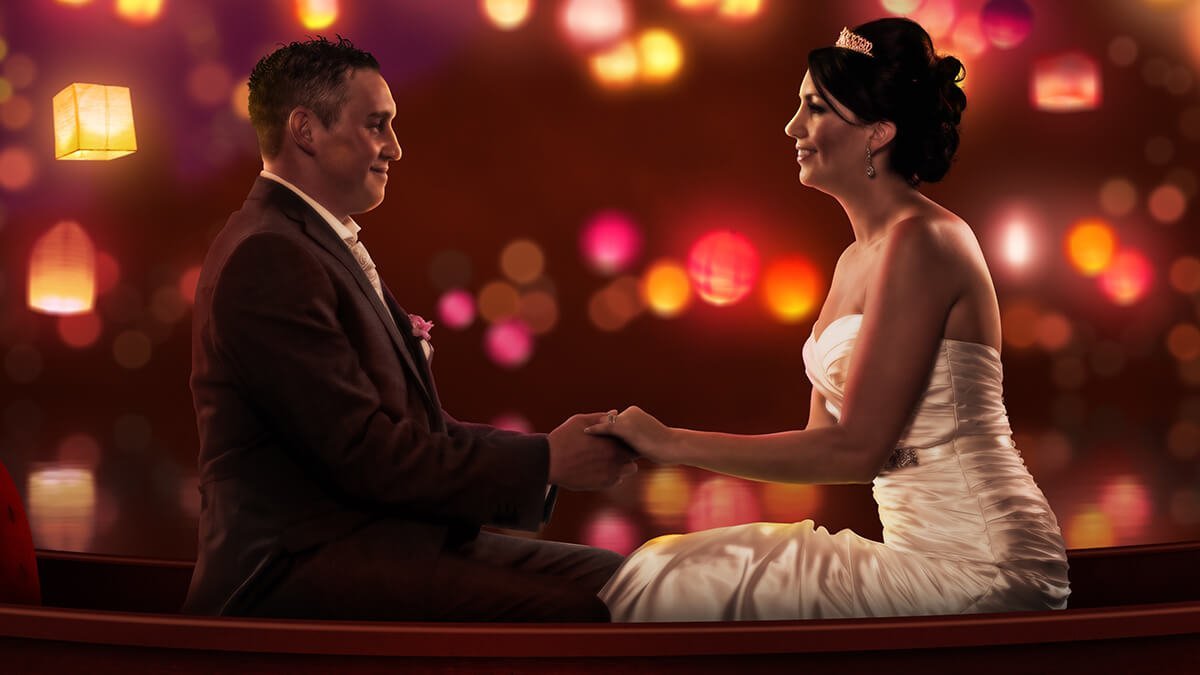 with no light wrap applied 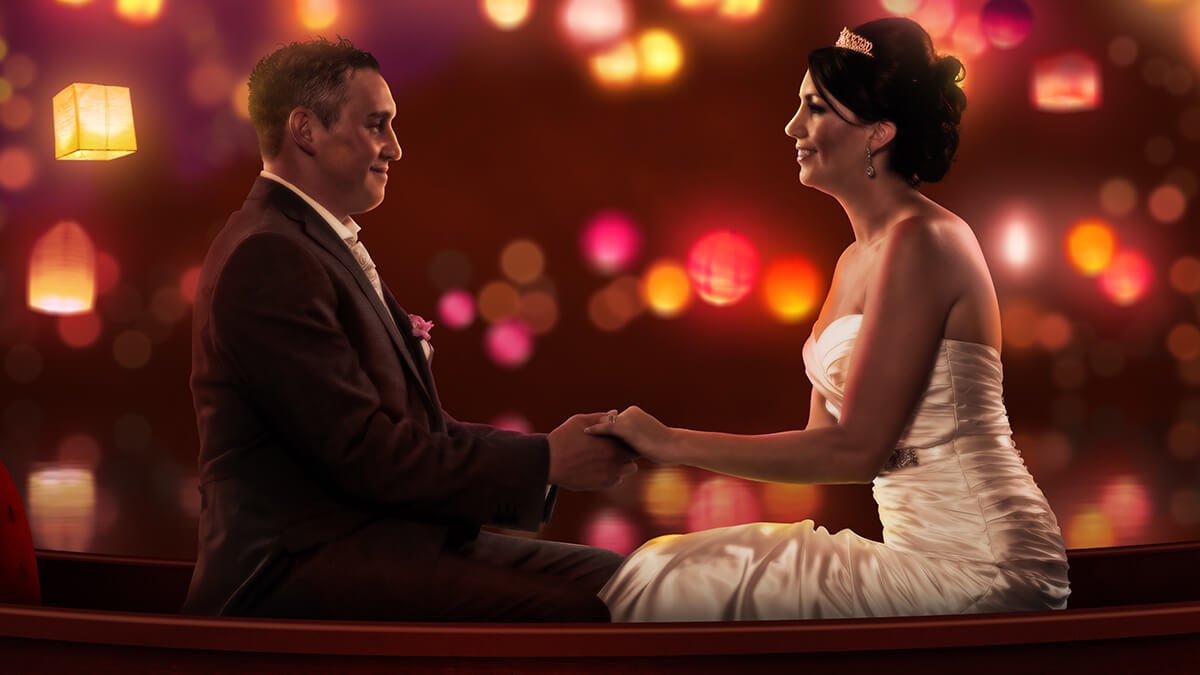 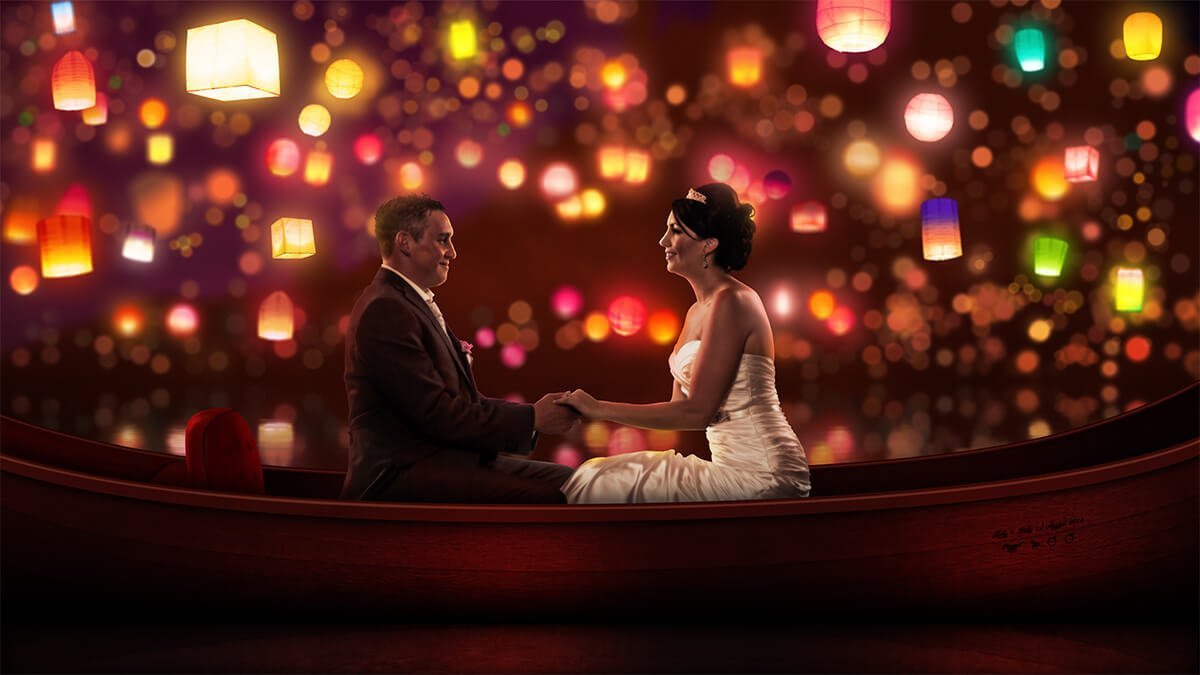 Why buy a photo frame when you can make one!

To finish the whole project off I decided to hand make a photo frame from reclaimed wood and then give the composite as a framed print to my friends Holly and Billy…this took a few days but was very much worth the effort. Below are some photos I took whilst building the frame.

step 1 – prep the wood. I used a electric sander to bring back the grain. 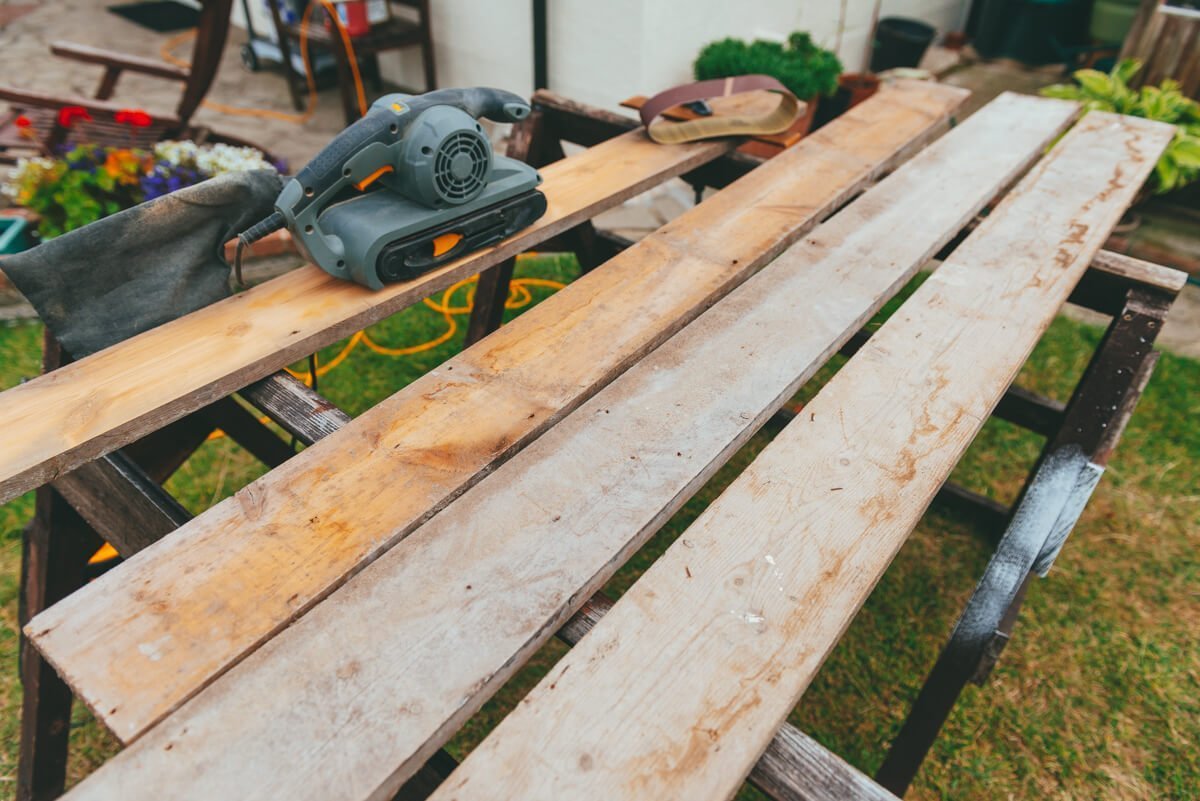 Step 2 – I used a router to create the rebate. 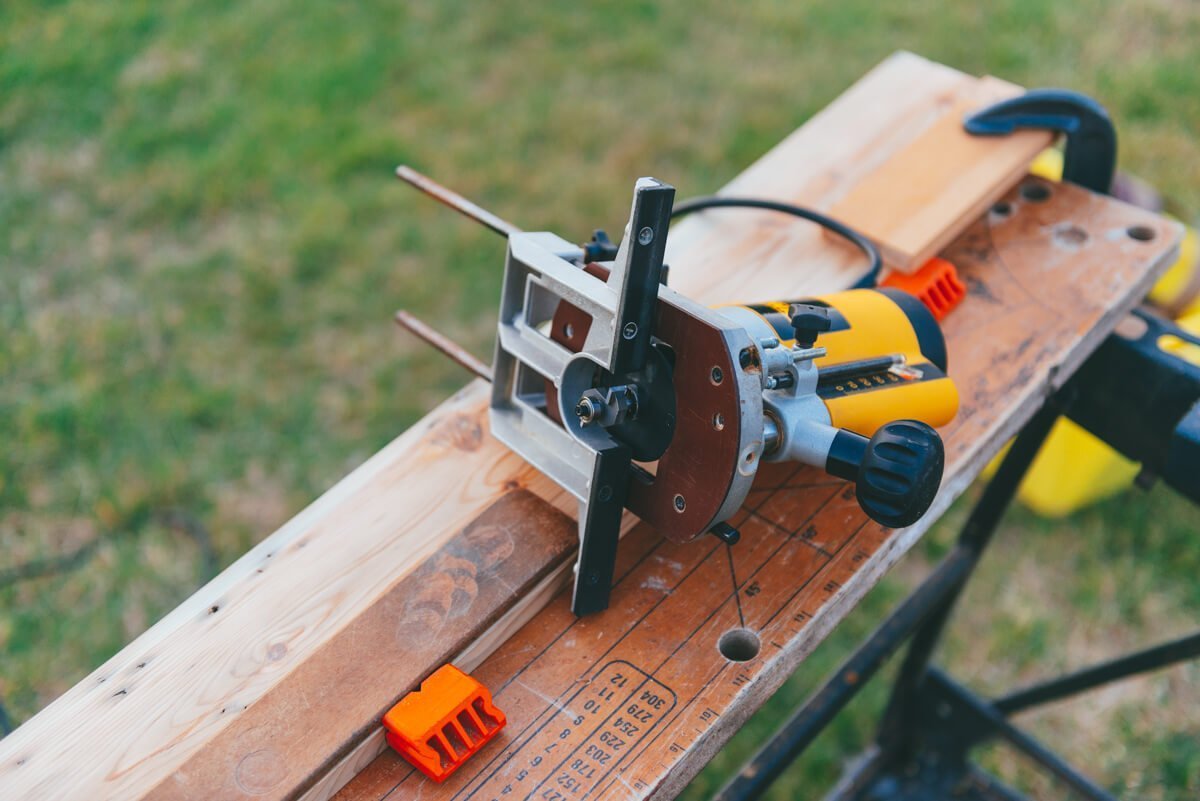 Step 3 – Cutting off the rebate so each side of the frame would fit together tightly. 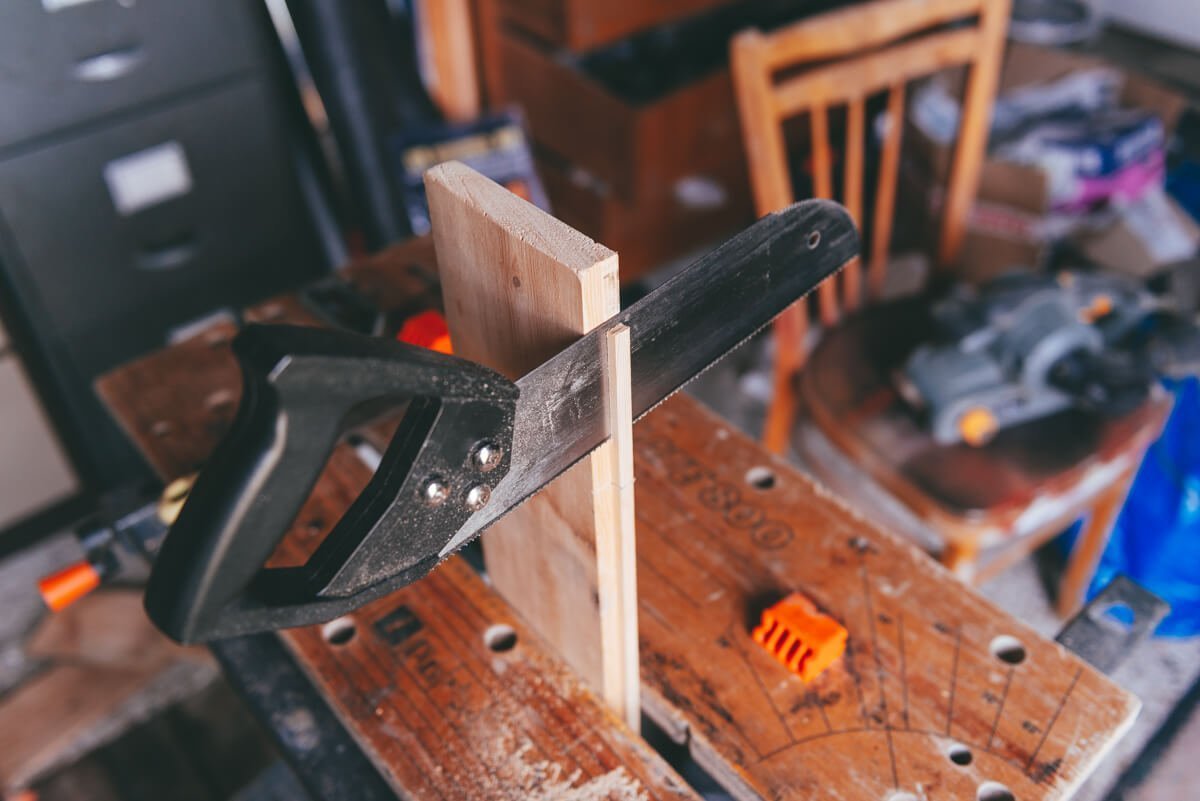 Step 4 – I then used a bench saw to thin down the frame sides. 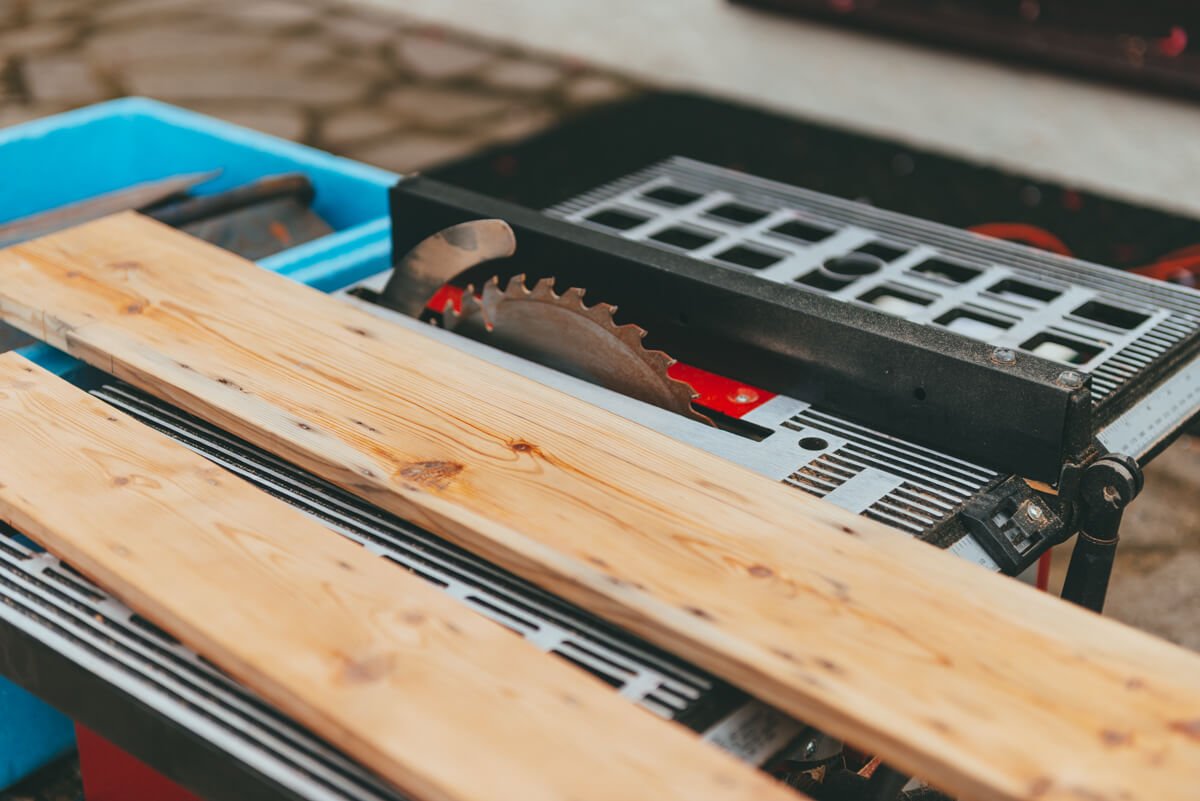 Step 5 – I then joined each side of the frame using some metal brackets and staples. I then dyed the wood using some Wickes Dark Oak wood dye. 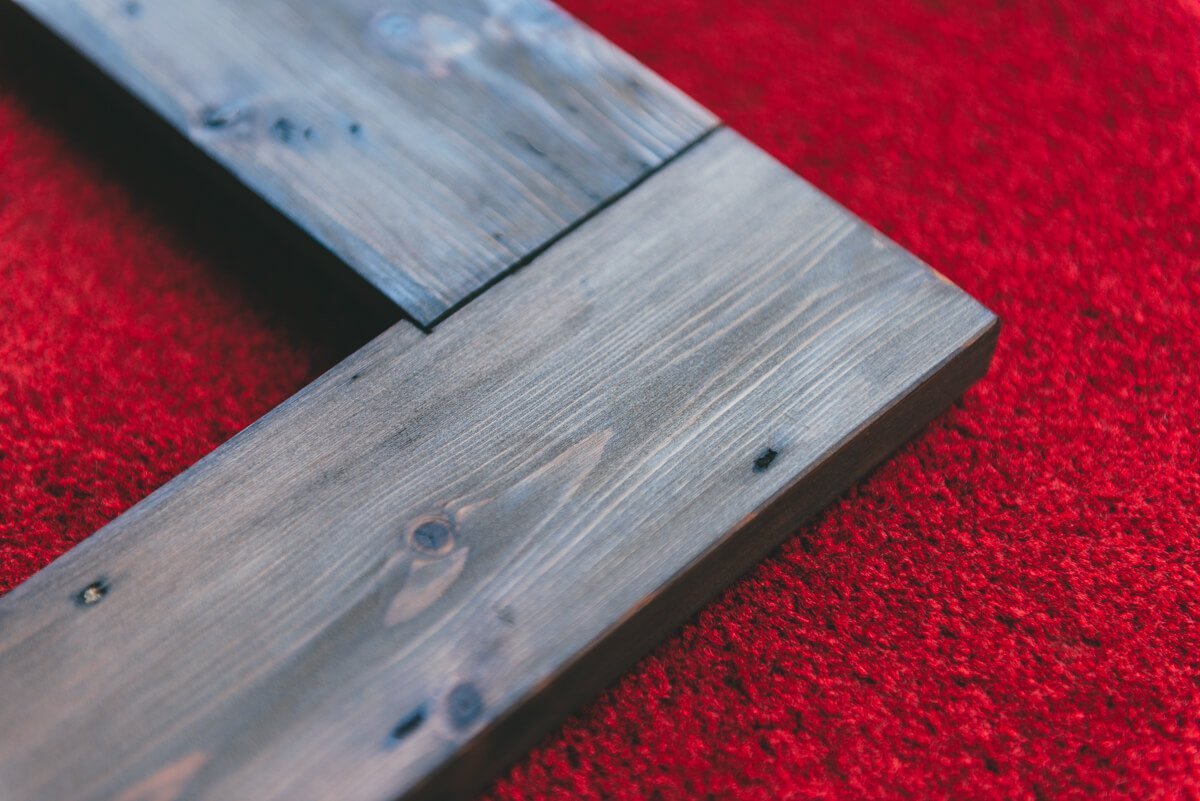 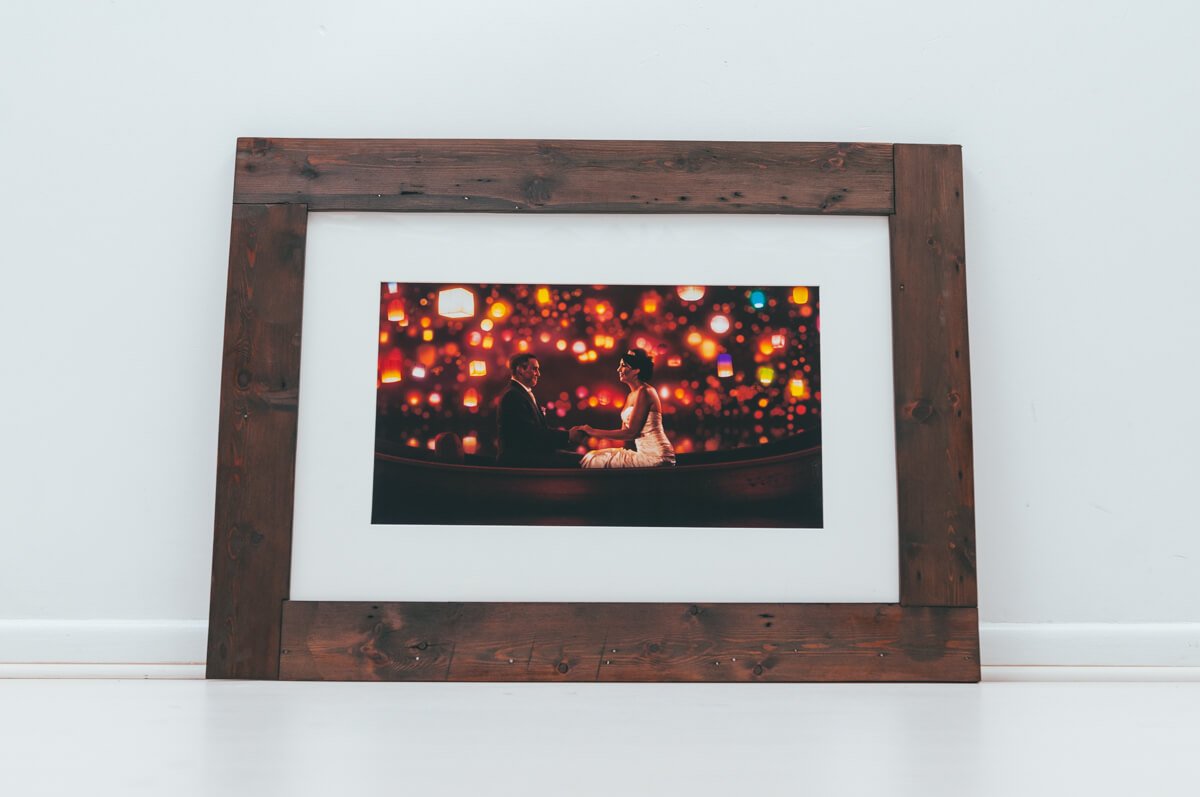